As February is Black History Month in the US, I wanted to focus on creating some blog posts that specifically highlight my experiences as a Black Lolita. While a vast majority of my experiences are positive, there are still some negative aspects, and I would be doing myself (and other Black Lolitas) a disservice if I ignored those issues that are part of our experience.

My next few blog posts will be very in-depth. Some will be helpful, some will be emotional, but all of them are important to the overall picture of what it's like to be a Black Lolita in the United States.


Maybe my experience isn't the same as everyone else's, and that's ok. I can't speak on what it's like to be a Black Lolita in Canada, or a Black Lolita in Mexico, or Australia, so just remember that everyone has their own unique story to tell.

I decided to start with a more light-hearted post before I got into the heavy lifting. You'd be hard pressed to find a Black Lolita that hasn't worried about how to style their hair while wearing Lolita fashion.

Before I go any further though, let's take a look at Afro (Black) hair in the first place.

This is my real hair. It's a little wavy, a little curly, straight in some parts, and currently dyed blue, XP

I am in the process of "transitioning" my hair, which means I am allowing my hair to return to its natural state after chemically straightening it since I was about 6 or 7 years old. I won't go into detail about the damaging affects of chemically straightening my hair since I was a child, nor will I talk about the reason WHY I did that for so long, other than to say: I've decided not to do it anymore.

Now, after taking a look at my hair, we can see two things: firstly, that it's short, lol. Secondly, it's kinda just floating in the air. This is a common trait of Afro-textured hair called "shrinkage". Basically, the hair curls up on itself and looks much shorter than it actually is. The amount of shrinkage a person has depends mostly on hair type.

Fun fact: Afro-textured hair is capable of shrinking up to 80% of its *actual* length (Source)!

Since I'm transitioning, I'll freely admit that I have no idea what my actual hair type is. As my hair continues to grow out, and I cut more of my straight hair off, I'll be able to find out, but hair type is important when understanding Black hair.

Hair types (also referred to as curl patterns) start at 1A, which is bone straight hair, and go up to 4C, which is kinky/curly hair. Most Black people have hair within the 3 to 4 range, though there are exceptions. To add, no two heads are the same. Someone might have a head full of 4C hair with sprinkles of 4A in some spots. However, the more kinky or curly a person's hair is, the more prone to breakage it is, as the hair bonds are more susceptible to bend under stress. As a result, many members of the African diaspora employ what is known as "protective styles".


I know this is a lot of information to process, so I'll try to quickly summarize: protective styles are used to protect Black hair from the elements that can cause the bending and breaking that I mentioned earlier. You've probably seen lots of people wearing these styles!

Styles such as braids, locs, twists, and cornrows will safeguard the hair from external elements. These styles ARE NOT for aesthetic purposes, they are necessary for the health and longevity of Black (Afro) hair. Typically, protective styles are worn for weeks at a time, and within the Lolita community, a vast majority of Black Lolitas wear these styles.

So ALL of this puts Black Lolitas in an interesting position. How do we use protective styles that will protect and care for our hair, while still staying true to the roots of Lolita fashion? Keep in mind that Lolita fashion was created in Japan, a country that for a lonnnnnnggg time had little to no Black people living there. If most people in Japan have hair that barely reaches the 3 category on the Hair Type chart, how can we seek advice from a group of people that don't have (and rarely understand) hair like ours?

The obvious answer is to just wear wigs. A lot of Black Lolitas (myself included) do, in fact, wear wigs, but some people don't like them or are uncomfortable wearing them. It's also hard to find examples of prominent Japanese models wearing protective hairstyles like ours (more on that later), so our only option is to turn to each other.

That's one of the many reasons why it's so important to have groups like the Black Lolita Community or other Black J-fashion groups. Black Lolitas need a resource of information much like the Gothic Lolita Bible or Lolita Tips to help us with our unique situations, such as finding hair and makeup styles that suit both us, and the fashion.

Since I consider my blog to be an information resource as well, I wanted to spend the rest of this post sharing some examples of my own protective styles in Lolita to perhaps offer a little inspiration.

Of all the protective styles, I love box braids the most. They take a terribly long time to get done (8 hours+), but they last forever, and I really love how they look. I wear box braids at least twice a year, and every time, I have Lolita events to go to, so I don't let my hair stop me!

Typically, braided styles are easy to adjust and acclimate towards Lolita fashion. Braided up-dos with flowers and crowns can be elegant and sophisticated. Braided pigtails or double buns are super cute with Sweet Lolita!

The key is to style the braids like you would a wig or your actual hair. You don't have to limit yourself to a particular look!


I've only worn artificial twists in my hair, so I can't offer any advice or assistance on the act of twisting one's hair, but I have some examples! Twists are easy to maintain as well, and certain styles can be manipulated like braids.


Afros in general suit Lolita SO WELL! The voluminous hair matches the volume of our petticoats, and everything just looks balanced!

As before, (since I've had straight hair for most of my life) I've only used artificial hair to achieve this type of style. In my picture, the hair from the previous photo was "twisted out" to achieve the poofy style you see here. But, every afro puff is not a twist out. Some are created by another method called a "wash and go" aka washing the hair and walking out the door. It really depends on the hair type.

I asked for a little help from my friends to showcase some great looks with their natural hair!


Another method of creating an afro is by coiling the hair around itself in a knot and then un-doing them, also known as "bantu knots". Here's a look that was achieved with this method!

For the first time in my life, I got crochet faux locs! This protective style uses a crochet hook method to install artificial locs to the hair, and can last for 6 to 8 weeks, if taken care of properly. I love the way these look, but again, these are artificial, so they're a bit different than someone who has taken the time and effort to grow real locs.

FYI: I refuse to call them "dreads" because this style is not dreadful, despite the stigma surrounding them. Locs are beautiful!

I got some help from a friend to showcase more gorgeous styles!


I know this post barely scratches the surface of potential hairstyles for Lolitas with Afro Textured hair. Honestly, the possibilities are endless! There are so many beautiful Black Lolitas with amazing styles that I wanted to feature for this post, but if I did, we'd be here all day!

However, if you walk away with nothing else from this post, please remember that for Black Lolitas, being able to see examples of people that look like them, wearing hairstyles that they use in their everyday life, is crucial. But also: if more Black Lolitas are able to wear their natural (and protective) hairstyles while participating in the fashion, it'll help the community at large to see and understand that we don't have to give up aspects of ourselves, or our culture, in order to be Lolitas.

Above all else, this is a universal message. You don't have to change who you are to be a Lolita.

Next week's post is going to be a difficult one. I want to challenge all my readers to hear what I have to say first, before having a knee jerk reaction to the commentary I'm going to make. Since I'm a little behind schedule for the month, I plan to have three more posts for this series, and I hope I can get them all up before the end of Black History Month.

Until next time, my lovely readers! 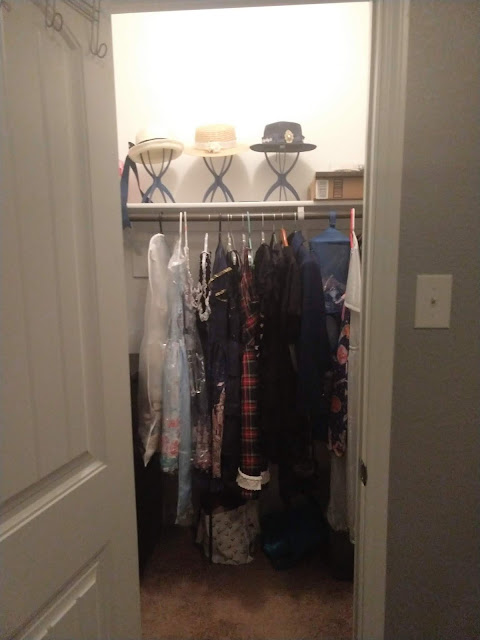 Too Much Taobao: My Lolita Wardrobe 2019 (Picture Heavy)

SaxonBlues89
What's up? I'm a lady in her 30s that loves Angelina Jolie, video games, writing, and anything involving food. I'm also a product junkie, and I love trying new things.